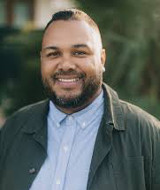 Introducing participants to the various ways we can make our voices heard in the public sphere. From letter writing to door knocking to protesting and community organizing – it all begins with telling our stories. Presented by Jerry Peña.

Jerry was born in the “Windy City” of Chicago and raised in Cleveland, Ohio. In Ohio, Jerry was very involved in the community; he was Chair of the Civic Involvement Committee, where he had the responsibility of recruiting and training local citizens on the importance of civic involvement. Jerry has also worked with several non-profits, such as the Cleveland Housing Network and El Barrio. At the Cleveland Housing Network he worked to secure housing for those who were in need of shelter and taught financial literacy classes to low-income families. Through this passion in helping those in need, he was offered a position at El Barrio where he worked on re-entry, it was Jerry’s job to create partnerships with local companies, who in turn hired men and women who had served time in prison. Jerry attended Baldwin-Wallace College in Ohio, where he majored in Organizational Leadership with a minor in Communications.