We often hear talk of, and many have even taken part in, strikes, boycotts, protests, sit-ins, civil disobedience and the like, all actions used to influence and encourage social change. What do these actions have in common? They are all methods of nonviolent action: a technique of action for applying power in a conflict by using methods that are not physically violent. It is important to note that nonviolent action is not passive, it is simply action taken that is not violent. 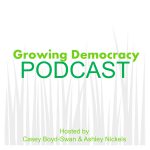 Over the summer, we will be copying show notes from each episode over to our website. May as well go in order of release, right? So, with that, we are releasing the show notes (previously only posted on SoundCloud) for Series 1-Episode 0! [read more]

This week we posted our 50th episode of the Growing Democracy Podcast! 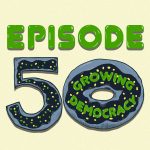 In March 2020, our events came to an abrupt end. Casey and Ashley needed to figure out a way to pivot the project in a way the allowed them to continue their mission, while staying safe.  They decided to launch the Growing Democracy Podcast – an idea that they’d been toying with for a few months already. So, in May 2020, they set to work. They planned to interview 10 people (elected officials, public health officials, nonprofit executives, ,local activists, and community organizers) about their experiences navigating COVID-19; they called it “governing during pandemic.” [read more] 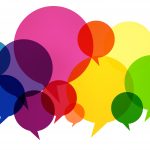 Collaborative community partnerships can generate long-term community development efforts. But, only when these partnerships maintain a governance structure that ensures voice, representation, justice, and inclusion for those who have been historically marginalized from this work. [read more] 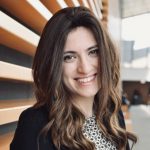 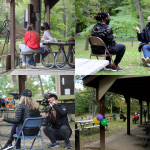 A few years ago, I got a call from two retired professors asking if I could prevent a Starbucks from being built across the street from their homes (spoiler alert: I couldn’t). As I looked into the details, a lot hinged on the zoning of a lot that sat vacant for years, after a funeral home was demolished in the space. It was grass-covered, and surrounded by 100-year-old trees, but it was across the street from a busy college campus. Despite being mostly residential, it was on a main road and was zoned for commercial buildings. No one had paid much attention to this vacant lot until now. “It could be a park,” neighbors begged the city, “or a community center.” But it was too late – a developer bought the land and built the Starbucks. [read more]

Media outlets- including local, regional, and national newspapers as well as radio stations, online news sites and neighborhood newsletters- vary in the roles they play in covering, supporting, and potentially harming community development efforts. Some outlets devote a beat to a variety of community-based projects. These might include real estate development, neighborhood beautification, affordable housing efforts, and community organizing work. Other outlets might cover individual events, should they be deemed of importance to the readership. Still others might be created specifically and devoted entirely to covering such projects for the community/neighborhood. [read more]

Grassroots efforts involve several iterative stages including agenda setting, marketing, mobilization, action, and accountability. At each stage, organizers use a number of tools to refine their voice, empower their members, and tackle the central concern of the campaign. [read more] 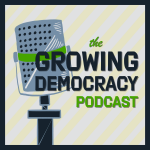 As an avid female gamer, the March 1st episode [with Dan Grueber] of the Growing Democracy podcast was something very exciting to listen to. I am also a graduate student in political science, so when I sit down to enjoy my favorite games, I also have more politically motivated thoughts while playing. Hearing Dan bring to light so many of the questions I have had while playing videogames made me feel not so alone or like I’m taking the games “too seriously.” [read more] 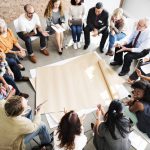 Grassroots community organizing begins with a community and a cause. Residents often already have a sense of a common issue the neighborhood, faith-building, school, or street is facing, yet often lack a cohesive group with which to discuss these issues and advocate for change. The first step to creating community involves conversation. Today, this often occurs on social media sites such as Facebook or Twitter and in collective spaces such as parks, libraries, faith-buildings, and schools. [read more] 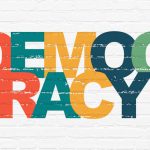 Developing communities in ways that enhance social justice, equity, inclusion, and participation requires non-institutional efforts from residents, themselves. Grassroots organizing is a process by which communities create and maintain social power through identifying shared concerns, mobilizing to pursue resolutions, and sustaining the capacity to confront future concerns. Grassroots organizing is one type of community organizing effort in which a group is constructed from scratch, usually due to a new opportunity to build collective power.  [read more]

Community development is the process by which individuals and organizations work together to resolve community-wide issues that require collective efforts, despite varying personal interests. [read more] 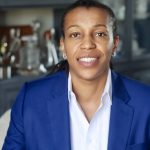 Current events often highlight discrimination and injustice for people who are Black or Latino, persons that are differently abled, identify as LGBTQ, or are poor, etc. There are contentious conversations related to the deservingness to access to clean water in Flint, Michigan and Sioux Falls, Nevada; the humanity of immigrants who are seeking refuge in the United States; or the desire to close the gender-pay gap. To say there are oppositional opinions about these topics is an understatement. However, these are real problems that affect all people and communities in the United States and an unwillingness to talk through and debate about these issues does not move society in a direction to deal with any of these respective matters in a way to bring about solutions. [read more]

The Cleveland Foundation, the world’s first community foundation, defines community organizing as “movement driven by the constituents of a community to build power and bring about systemic change” (CLE Foundation). It is especially noteworthy that this community-based organization, the first of its kind and still amongst the largest in existence, references Saul Alinsky’s rules of organization. [read more]

What even is Community Organizing? by Anna Hutcheson (posted Feb 12, 2021)